Many readers will have seen the press stories this year about the Coronation Meadows – this is national scheme, spearheaded by HRH the Prince of Wales, to create new hay meadows by collecting hay-rich seed from flowery meadows and spreading it on new areas. This has long been recognised as one of the best ways to create new meadows, collecting a variety of local seeds all at once. Flowery hay meadows were once a common site across Britain and hay was vital for feeding stock over winter; however, since the end of World War 2, about 97% of lowland hay meadows have vanished as hay has been replaced by silage and hard feeds or field have been converted to arable uses, development or sown with high-yielding grasses. 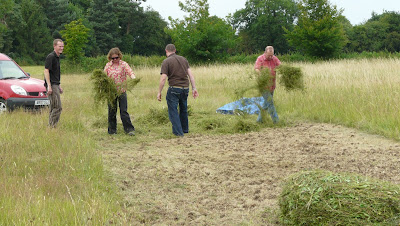 Coronation Meadows were established across England and Wales earlier this year and Norfolk’s was probably the smallest – a couple of hundred metres of road verge at Wood Lane, near Pulham Market. Although tiny, the verge supports a range of wild flowers, such a dyer’s green weed and pepper saxifrage, with the star being sulphur clover – a large, downy, yellow clover that is nationally scarce, but has its stronghold on the road verges of South Norfolk. 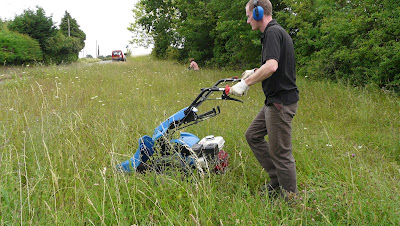 On a sunny day in late August, I met with Henry Walker from Farm Conservation, plus Shane Plant and Martin Plane, who had been funded by Norfolk County Council (who are responsible for the verge) to cut and collect the hay from the verge – aiming to gather as much seed as possible.  Shane and Martin brought a reciprocating mower and I brought my scythe, the cut hay was raked and packed into large sacks, then driven to Wreningham, where Henry had worked with a farmer to prepare an area of ground for the seeds.  The ground has to be prepared by “scarifying” – creating some bare soil for the seed to germinate in.

Previous attempts to sow sulphur clover hay have proved successful, but the new meadows need to managed by cutting and removing the hay each year.  With this management, the new meadows  should flourish and provide not just a home for wild flowers, but for bees, butterflies, crickets and grasshoppers, reptiles and small mammals.
Posted by Norfolk Wildlife Trust at 20:27

Email ThisBlogThis!Share to TwitterShare to FacebookShare to Pinterest
Labels: A Living Coast, Conservation, People and Wildlife