In October, major conservation work to all the grazing marshes was resumed and completed at NWT Upton Broad and Marshes by the end of 2013. The network of foot drains - long narrow lines of shallow water snaking across the grassland delivering fresh water from the existing system. With increased water levels the landscape transformed into a wetland attracting wintering wildfowl. The combination of flashes of open water, inundated grassland, shallow foot drains and dykes with gently-sloped edges is the culmination of long-term management objectives. The number of birds feeding on the grazing marshes continues to increase.

In recent winters, pink-footed geese have rarely settled on the marshes, despite large numbers roaming between arable fields in the area. November saw small groups for the first time visit consistently, and by the second half of December, over 1,000 could be seen grazing the very wet Boat Dyke marshes. The relatively close proximity of groups of walkers, many with dogs, using the river bank path did not disturb the feeding geese. This area also attracted good numbers of lapwings, frequently around 500. Over the marshes as a whole, plus the lands immediately across the river, over 2,500 had accumulated by the year end. Other groups of waders on the wet marshes were black-tailed godwits (max. 22 on 20 Dec), ruffs (max. 20 on 27 Dec) and golden plovers (max. 90 on 29 Dec). 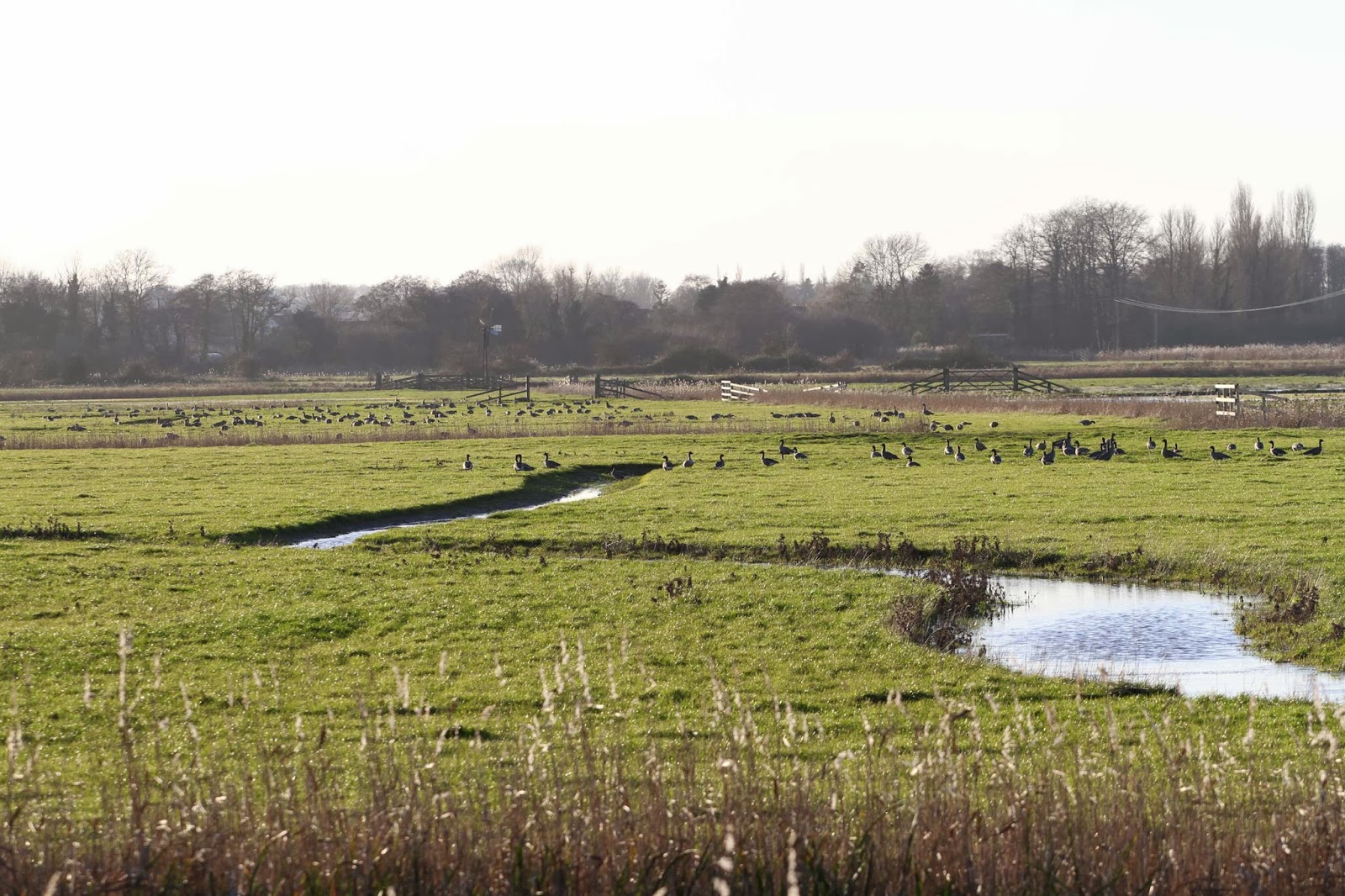 During daylight hours very few duck had been present on either the marshes or the river lagoons since mid-November (up to 18 shovelers were at the lagoons prior to that). Usually there were no more than a few teals and mallards and a pair of gadwalls despite some 350 wigeons on neighbouring marshes.  Through monitoring g we have discovered that during darkness, the situation is quite different. The wet marshes were invaded by a variety of species, best identified by their frequent calling. During December nights, these included wigeon, teal, mallard, greylag, Canada, Egyptian and pink-footed geese, lapwing, golden plover, snipe and woodcock. Through night-vision optics, birds were seen distributed over the entire marshes.

The corvid roost in the wet woodland at the Doles continued to comprise several thousand Rooks and Jackdaws. Although  an extensive area of this woodland had been removed during the last two winters to reclaim fen, the roosting birds merely re-located to adjacent stands. Another evening and early morning spectacle was the flight of the Cormorants en route between the coast and their roosting trees beside NWT Ranworth Broad. 704 were counted at first light in mid December.

Increasingly cranes have featured in winter. Throughout October and November, a group active in the Bure Valley concentrated at the reserve and St Benet’s Level (there utilising ploughed land). Their number varied, usually 12 to 25, with a maximum 34 on 16 October. Rather fewer were seen in December.

The marsh hedgerows provided an abundance of berries, which drew variable numbers of winter thrushes. A peak of 550 fieldfares arrived around 23 December and foraged in the hedgerows and on the wet grassland. A small number of bullfinches were, as usual at this time, located in these hedgerows.

Also wintering in and around the reserve were two redshanks, a peregrine (two in mid December), barn owls, marsh harriers, a hen harrier and a buzzard. A snow bunting was beside the river on 10 November, the same day that 12 whooper swans flew across the reserve and landed briefly on St Benet’s Level. Three dunlin were on the marshes on 14 November and a curlew on the 16th. A small number of bearded tits stayed concealed in riverside reedswamp, occasionally venturing into reed-fringed dykes. A drake goosander on the river lagoons on 14 December was an unusual visitor. 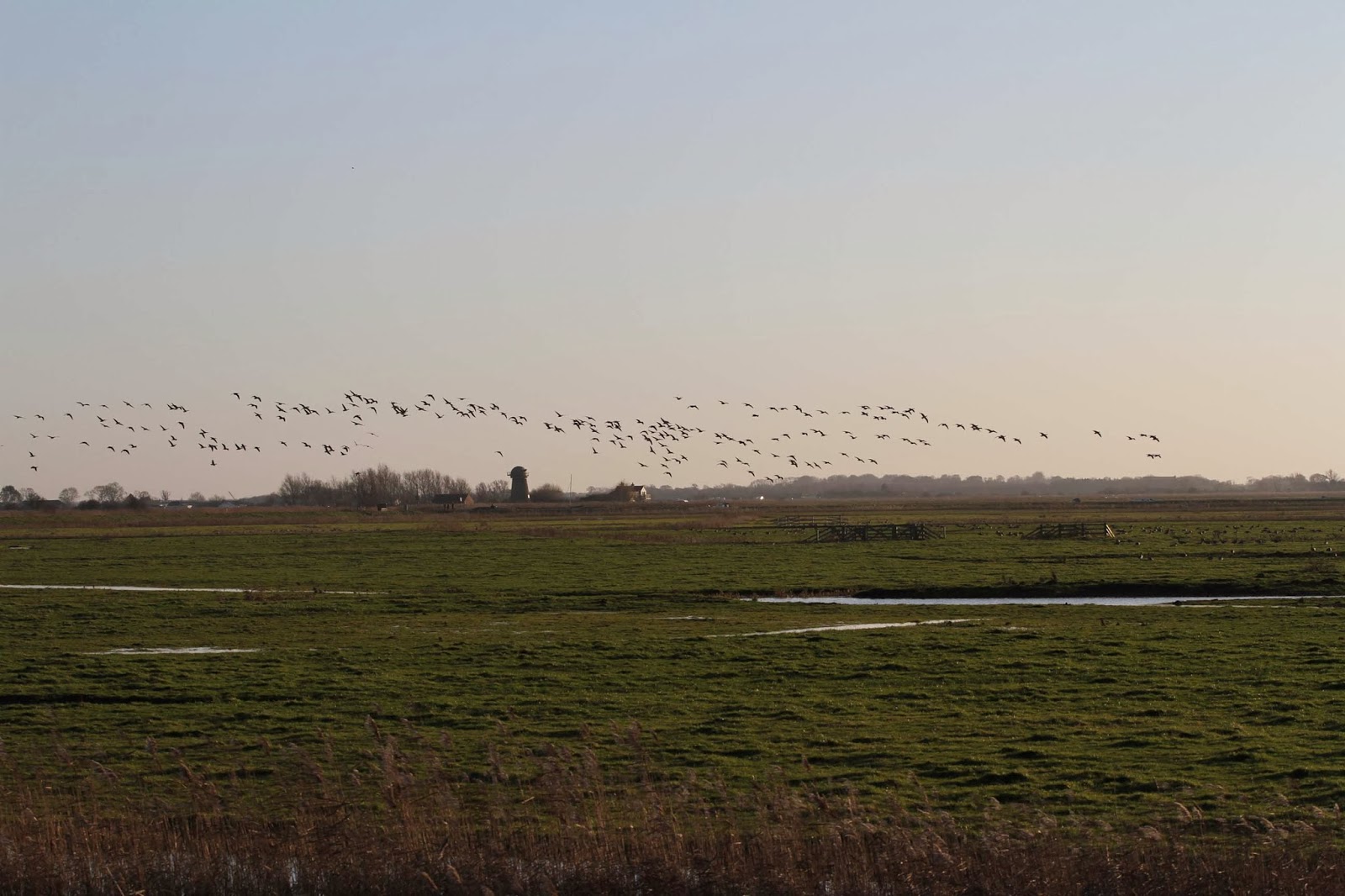 Over the last few years, several habitats in the reserve have been subjected to extensive modifications. The river bank was raised and in places re-positioned, the river lagoons were created, the grazing marshes and dykes configured to allow control over higher water levels and permanent water bodies, the reed bed adjusted with more open areas and deeper water to suit bitterns, scrub and carr woodland reduced to increase the extent of herbaceous fen, and Little Broad mud-pumped to improve its aquatic diversity. Permissive paths have been extended and widened to afford visitors greater opportunities to access all sections of the reserve. Over the next few seasons gradual changes in the vegetation are expected where these major interventions have occurred, and it should be an exciting time for the naturalist to observe how the flora and fauna responds.

Posted by Norfolk Wildlife Trust at 20:48