Over the last few weeks the stone curlews have started to settle on the heathland. There are now three established pairs all on scrapes. Pairs 1,2, and 3. But it is pair 3 that is to be the star of the Brecks! Our enthusiastic visitors have become quite fond of this pair, naming them Cynthia and Hue.

This year NWT Weeting Heath is part of one of the exciting Breaking New Ground projects called ‘Wings over the Brecks’. This project has been formed between the RSPB, The Forestry Commission and Norfolk Wildlife Trust. Weeting Heath is the first site to have a camera up and running recording live footage of our secretive stone curlews! 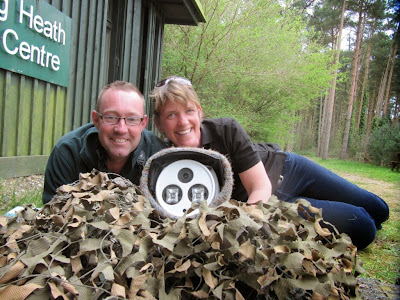 Before the arrival of the stone curlews, 150m of camera cable was set up on the heathland. Many different designs were explored by the team to find the best possible disguise for our camera...

In the end, our Reserves manager sacrificed one of his socks to expertly camouflage the camera… and Sock Cam was born! 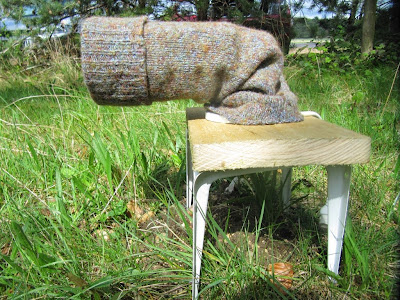 The launch of Sock Cam onto the heath was scheduled for a hot and sunny day. This is vitally important, as it minimises the risk of the eggs getting cold when the adults temporarily leave the nest. With radio communication between the team, we found the scrape and set Sock Cam into the ground at a suitable distance. To our delight, Cynthia and Hue returned to the scrape only 20 minutes after Sock Cam was in place.

Last Friday, it captured a stoat being bombarded by lapwings. Just as it thought it had escaped, it ran into a pair of rabbits! The lapwing and rabbits joined forces to form a two pronged attack against the stoat. After a lot of scraping and the stoat leaping in the air, it hot footed it back across Sock Cam with both lapwing and rabbits in hot pursuit. While this was all going on, all the stone curlews managed to do was turn their heads and watch the drama unfold! 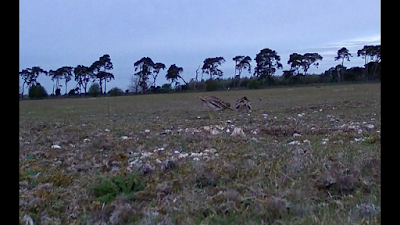 Other footage captured has included nest changeovers. Both Cynthia and Hue take turns sitting on the eggs, and generally swap over every two hours. The timescale of one bird arriving to the initial swap over is usually 30 seconds to a minute. However, one wet and windy day Cynthia was very reluctant to leave the nest so made Hue stand in the wind and rain for an extra two minutes. In retaliation, he then shoved her off the nest to sit down.

Both stone curlews and lapwings nest on the heathland, often in close proximity. They may join forces to see off a predator, but do not get along well with each other: stone curlews will quite happily kill and eat a lapwing chick. 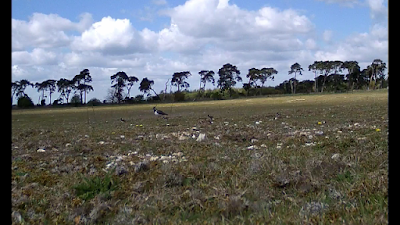 One of my favourite bits of footage from Sock Cam is a drake lapwing leading his four chicks across the heath. They come right behind the scrape and Hue doesn’t even bat an eyelid, as he was more intent on sitting on his eggs. 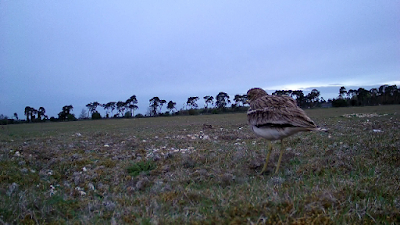 The stone curlew eggs are soon to hatch, so watch this space for future Sock Cam updates!

Posted by Norfolk Wildlife Trust at 20:26