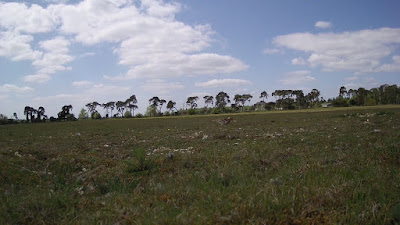 The two stone curlews at Weeting Heath that have been the stars of the Wings over the Brecks project hatched two chicks on 16 May. Sock Cam revealed this footage as the female was seen removing egg shells from the nest. This assists hatching and draws predators away from the scrape. To be on the safe side she ate the second empty egg shell so she didn’t leave the first chick on its own. She then called to her mate to let him know the chicks had arrived. 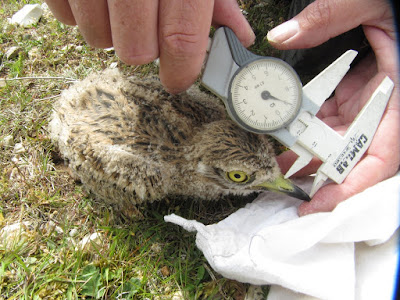 Three different colour rings and a metal BTO ring were gently wrapped and glued in place around their legs above and below their knees. A small piece of plastic bag was placed around the top of their leg to act as a ‘nappy’ so the glue didn’t touch their feathers. 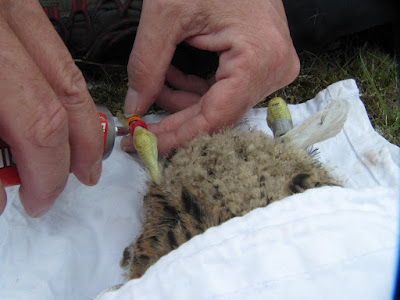 Their heads are lightly covered to calm them and to minimise stress. While this was going on the parents didn’t take their eyes off us for a single second. Ringing enables conservationists to identify the individual birds and to monitor their progress throughout their life.  Now 26 days old, these chicks are growing fast but are still vulnerable to predation until they reach fledging age at six weeks old. These chicks have been christened ‘The Godwin Chicks’. 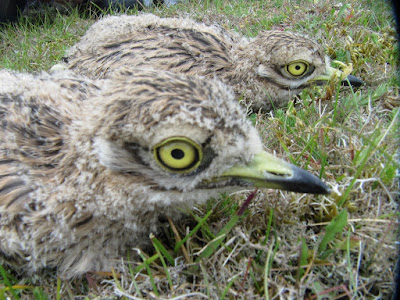 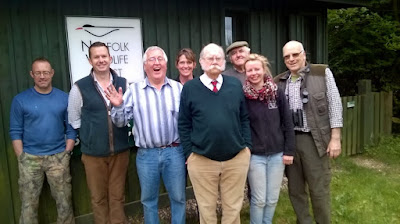 Frank Godwin began volunteering in 1991, making him our longest standing volunteer warden at Weeting Heath NNR. For many people the first question they ask upon arrival to Weeting Heath is ‘Is the Colonel here?’ Frank has been a very important part of Weeting Heath reserve, and knows a great deal about the history of the reserve and the stone curlews. Franks’ commitment to stone curlew conservation has been second to none and he has played a significant role in helping train the summer warden each season. He kept everyone entertained with his stories from his life in Africa, and tales of previous Weeting Summer wardens and always enjoyed taking people to the hides to show them the stone curlews. He officially retired on 11 May this year and will be thoroughly missed by staff and visitors.

Unfortunately the other chicks from our other breeding pairs didn’t quite make it to ringing.

Our first breeding pair hatched one chick on the 12 May, which was swiftly predated by a carrion crow at 11 days old. The third breeding pair managed to hatch two chicks on 10 May. Their fortunes’ weren’t much better.

A rogue male was seen trying his luck with the mother of the two chicks from our third breeding pair. In retaliation to his rejection, he unexpectedly picked up a chick and killed it! Needless to say a massive scrap ensued and four adults chased him away. This is very odd behaviour as it is frequently one adult that sees off an intruder, and cannibalisation doesn’t typically occur within the same species. However records do suggest that this peculiar behaviour happens in oystercatchers.

The second chick made it to 12 days old where it too was predated, by a stoat. The lack of hot weather has also made it difficult for the chicks to grow fast and get enough food. So fingers crossed our surviving chicks will make it to fledging!
Posted by Norfolk Wildlife Trust at 18:46