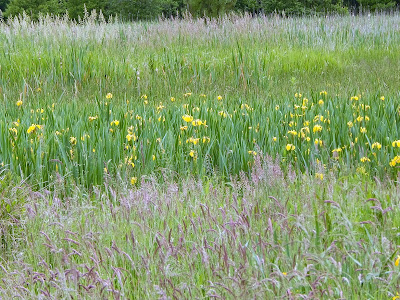 Our walk this week took us to one of NWT's newest sites at Rush Meadow on the outskirts of Dereham. The site was approached via Rush Meadow Road which had a lovely buttercup meadow on the right hand side. On one side of the path was a tributary of the River Wensum whist on the other side was a large area of wet grassland. This was aglow with yellow flags punctuated with reeds and the fluffy remains of bullrushes. It really looked stunning on such a sunny day!

We saw several other flowers in the area. By the water grew sweet rocket in shades of white/ lavender/ purple - quite often this is seen in gardens and not in the wild. Also by the water's edge we saw water forget-me-not and in a few places Himalayan balsam which could prove to be a thuggish problem in years to come. On drier parts of the path we came across patches of pineapple weed with its wonderful scent. The trees growing by the river were mostly willow and elder. 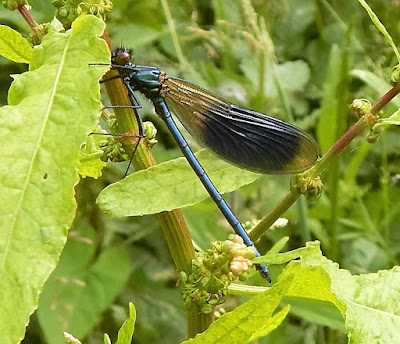 Insect interest was provided by fluttering black and turquoise coloured banded demoiselles. They looked very handsome. We also saw several less gaudy females. Again this week's prizewinning songster was a robin with his backing group of chiffchaffs and skylarks.

Soon we came to a boardwalk followed by a footpath through woodland leading back to Dereham. This was an unexpectedly lovely walk - a sunny day, acres of yellow flags and a song in the air. What could be better than that?

Posted by Norfolk Wildlife Trust at 14:07