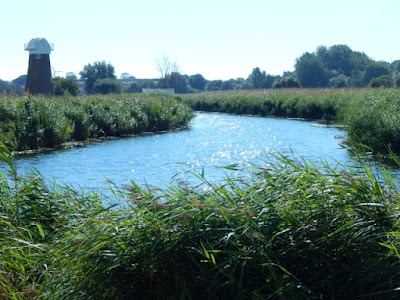 Martham Broad is part or the internationally important Upper Thurne Living Landscape project area and has survived as a working wetland for generations.

It was yet another beautiful day when we made out visit.  We parked the car in the small car park at the end of the village of West Somerton and first took the northern footpath along the River Thurne. This lush, fertile area demonstrates the importance of working together with wildlife, as could be seen by the large dredger in the main river, and diggers clearing the many dykes, all with the aim of providing the best possible habitat for wildlife.

We started off on the northern footpath and within minutes we were surrounded by dragonflies and damselflies of all colours and sizes. Never had we seen so many at one time. Particularly abundant were the very large hawker dragonflies, darting around to within a few feet of us. Such a shame they wouldn't stay still for a photo opportunity! There were plenty of butterflies to spot including red admirals and peacocks.

In no time at all we saw our first bird of prey, a hobby which circled around and flew into an abandoned windmill.  Next we saw the first of many marsh harriers; long golden legs dangling as it followed the dykes searching for food. Shortly after we were alerted to another marsh harrier by the rising of a flock of terns who had seen the predator before us. We also stood and enjoyed a kestrel diving and swooping over the reedbeds right in front of us.  All this happening and we had only been strolling for half an hour!

We went back to the car for a welcoming coffee break before setting off again on the southern footpath. This was a very different experience from the open north side as we followed a pretty path around the broad and through woodland carr. Along the way you can stand right at the edge of the broad and see shoals of fish in the crystal clear, unpolluted water. We counted over 40 swans in this stretch.

We finished off the day with a late lunch in the Kings Arms in Martham; a delightful pub overlooking the village pond. Thank you NWT for a fabulous day out.

Posted by Norfolk Wildlife Trust at 18:46