Of dead leaves, green shoots and pots of gold 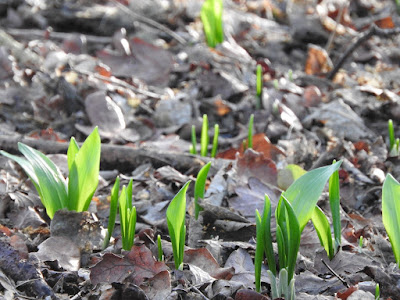 There is no greater alchemy than the bringing of life from death. And yet, as the world turns, and February days lengthen, the sure signs of rebirth are all around us. Along every country lane, in every Norfolk copse and spinney, in field and furrow the seemingly fragile green shoots of new life are already appearing.

One of my favourite walks, very close to where I live, passes through a small wood and  despite strong wind and showers this new growth is apparent everywhere. Out of last autumn’s now grey leaves fragile shoots are pushing upwards towards air and light. Some leaves are still tightly rolled in green wands, others unfurl in exquisite translucent greens catching the ephemeral light of a February sun as it plays a losing game with darkening clouds. For moments, and moments only, each fragile leaf seems lit by its own green light as if fully absorbing the sun’s rays and then radiating them back out in a soft green fire – every new leaf a living light surrounded by crisp and very dead grey leaves and dark, brittle twigs blown out of the rooks’s nests that sway in creaking, tree-tops high above. Here in this small wood these first shoots, holding the promise of spring to come, are the first emergence of wild garlic. Wild garlic, or ramsons as its also called, that by April will carpet this woodland floor in a sea of green above which starry balls of white flowers will shine. To walk across these massed green leaves is to leave a pungent trail of wonderful, but overpowering, garlic. A smell good enough to eat, and yes, just a handful of these myriad leaves will end up back in my kitchen.

This February of course is not at all typical. The mild wet winter has brought forward the growth of many plants by several weeks. My walk to the local village shop,  even in late January, was brightened by ‘pots of gold’, the half-open cups of golden-yellow celandines, which only when the sun shone open to turn into bright yellow suns of their own. Walking the dog around our many farm lanes it’s no great surprise to find dandelion, red and white dead nettle, and mayweed in flower along our local field edges. These ‘weedy’ species are pioneers, adapted to grow fast and flower whenever opportunity arises and at least some will be in flower every month of the year.  But this year even in late January barren strawberry and dog’s mercury were in full flower, true signs of just how unusually mild this winter has been.  And now in February alongside the expected snowdrops (February fair maids as they were once known) are the first flowers of alexanders and in village gardens yellow daffodils whose trumpets really shouldn’t sound until March. The sword-like leaves of wild garlic under hedgerows are already grown large, darker green on their outer sides and lighter green on the inner surfaces of their green cowls. In other years these flowers would make their first appearance a whole month later. 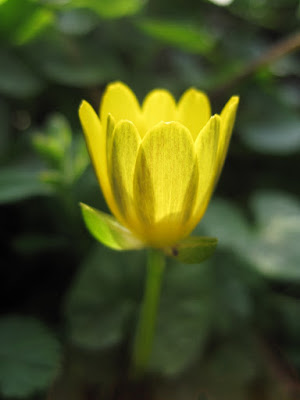 My February walks are also accompanied, at least when I can hear them above the wind, by the songs of song thrush, dunnock, robin and chaffinch, the drumming of great spotted woodpeckers and the ‘teacher – teacher’ notes of great tits. All this may change of course. Should a cold spell set in then the birds now singing will need every daylight hour to feed and hopefully survive the cold of winter nights. At least for now the sounds of garden birds and growing greens along every verge spell rebirth and at least a promise of a spring to come.

Nature’s yearly miracle of new life is upon us, but perhaps a little early!  In the next few weeks I will be keeping my eye out for blackthorn decking my local hedgerows white, first nodding violets flowering in my garden and the pure gold, shining in wet  hollows, of one of my favourite flowers, marsh marigolds or kingcups as they are also known. Out of dead leaves everywhere the miracle of new life - the kingcup is dead, long live the kingcup.
Posted by Norfolk Wildlife Trust at 19:19