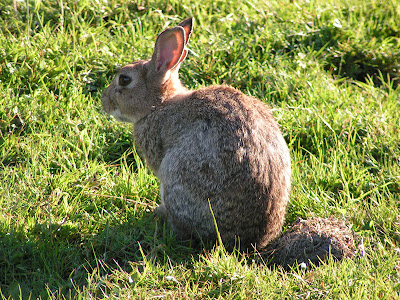 Fluffy bunnies, maybe, but this is a species which has nibbled whole Norfolk landscapes into shape. The rabbits’ impact on so many aspects of our land, habitats and wildlife was only really demonstrated when 99% of them vanished following the introduction of myxamotosis in the early 1950s. Rabbits were also the foundation of an industry based on exploiting their meat and fur that lasted for centuries and had profound impacts on many parts of Norfolk, nowhere more so than in the Brecks. The rabbit was also a major pest, causing problems for both farmers and foresters. Love them, or hate them, their influence has been surprisingly large.

The rabbit, like the pheasant (see previous post) is another species which is not really native, though ironically today it’s usually seen as a force for conservation good rather than as an invasive alien.

The early origins of rabbits in England are somewhat contested. Most authorities have this species down as introduced by the Normans but others suggest that the Romans may have brought rabbits with them and yet others say they arrived with the returning Crusaders. However they first got here, they were highly valued, with managed warrens established and controlled by the Church.

In parts of Norfolk warrening was well established by the 1300s. The areas of land covered by warrens in the Brecks and West Norfolk was immense. The boundary banks of each warren could run for many miles and were often topped with gorse hedges in an attempt to prevent rabbits straying into neighbouring warrens. Great fortified warren lodges, often build to a standard design, housed the warreners. From the 1300s to the 1900s there were working warrens in the Brecks. At first, in early medieval times, rabbit meat was a luxury, the food of nobles and the Church. However in more recent times it became a poor person’s meat, and then from the 1900s was even used to produce pet food. The scale of the rabbit industry in Norfolk was huge. As recently as the 1920s one estate in the Brecks was still employing 30 warreners and killing 120,000 rabbits a year. Many Norfolk rabbit carcasses were exported to London for the meat market but there also developed a lucrative industry centred on Brandon based on their skins. Rabbit fur was used to produce felt for the hat industry.

Of course by the twentieth century rabbits weren’t just in warrens they were almost everywhere across Norfolk. I don’t know at their peak how many rabbits were in Norfolk but nationally between 1950 and 1953 more than 40 million rabbits a year were being killed from an estimated population of well over 100 million. Then came myxamatosis, illegally introduced from the continent by landowners. More than 99% of rabbits were dead within three years.

This sudden disappearance of rabbits revealed how potent an influence they had been having on landscapes and habitats. Rabbits don’t thrive in areas of long grass or woodland but their nibbling creates just the right conditions for them, producing areas of closely grazed turf and lots of bare soil from their diggings. Many rare plants and insects thrive in just these conditions. Remove the rabbits and long course grass soon grows up and eventually scrub or even woodland may develop on what was previously sandy grass-heath. Lose the rabbits and you lose a special habitat and a whole host of rare species that depend on it.

Today rabbits are once again widespread. Every rabbit kitten will suffer from myxamatosis during its first year of life but many now survive, rabbits having evolved a degree of resistance. On nature reserves such as NWT Weeting Heath conservation management includes looking after the rabbits by ensuring favourable conditions for them. Without rabbits the nationally rare stone curlew would not find the habitat favourable. It, like many rare Breckland plants, including the beautiful spiked speedwell and Breckland thyme, depends on short rabbit grazed turf to thrive.

So though the rabbit is without doubt an introduced species, today it finds a warm welcome on many Norfolk nature reserves. And then again, without the rabbit where would predators like the stoat, buzzard and fox be? So perhaps the rabbit, after many centuries here, should be offered citizenship rights. Love it or loathe it, it’s over here, and here to stay.
Posted by Norfolk Wildlife Trust at 20:19