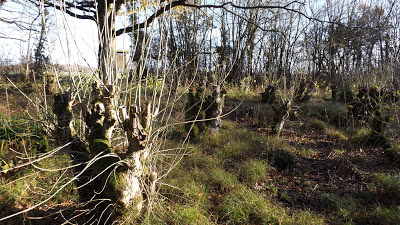 Walking through the coppice of Honeypot Wood at the end of last year, I found myself marvelling, yet again, at the curious looking Ash stools of this ancient woodland. Coppicing, the tradition of cutting the trees down every few years, allowing them to sprout new shoots and grow again, has over time, produced strange twisted stumps or “stools” that for some reason are extra tall in this wood. As to their unusual height, I’ve heard theories of keeping new growth above flooded ground or out of the reach of hungry rabbits but a woodman that didn’t want to bend his bad back seems more likely an explanation to me. These days we still coppice but not for harvesting materials, as in the past, but to benefit the wildlife that has come to rely on the cycle of light and shade and on the bushy habitat that it produces.

Sadly I found what I was looking for, withered black leaves and dead stems with dark stained lesions on the bark. Another one of our woods has Ash Dieback.

New dots on the Chalara fraxinea  map seem to be appearing daily, but this is more likely to be because we are looking for it rather than the rapid spread of this destructive fungus. I gathered samples and double bag them, they are destined for the laboratory for conformation by DNA testing.

I wonder what effect the disease will have on this woodland. How many trees will be infected and how many of these will be killed? What of the wildlife that relies on the Ash trees, the birds, the invertebrates and fungi? Will the lichens and moss, clinging to the branches, survive on the more acidic bark of other trees like Oak? Will less Ash allow a more diverse woodland under storey to develop? An increase in dead wood will certainly bring benefits to wildlife.

There are so many confusing and conflicting accounts of what damage has been done to the population of Ash trees on the continent it is difficult to know what it means for our woodlands.

Many are saying that the hope for the future will rely on finding strains of Ash that show some resistance to Chalara and allowing these to propagate their genes. If these genes do exist surely they will be found in ancient woodlands like this one.

Nature frequently adapts and overcomes, the old earth works and cracked concrete are  reminders of how much change this woodland has seen in its long history. The RAF stored bombs here during the second world war, and the ability of nature to claim back what was destroyed, is astonishing.

As I scrubbed any risk of contamination off my boots I thought back to all the cases of Chalara I’ve seen in our woods since first spotting it way back in mid-September. I am not surprised to find Chalara in Honeypot Wood but I am surprised at how little of it I’ve found. Is this just because the infection is only in the very early stages or dare I hope I am witnessing some level of resistance? Maybe things will be clearer in 2013. Watch this space!

Posted by Norfolk Wildlife Trust at 19:00