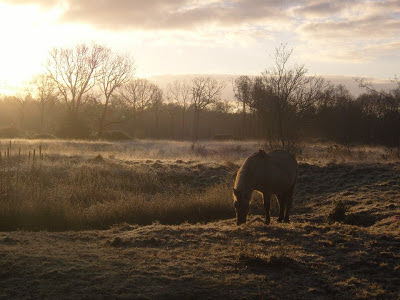 The Konik is a very hardy and primitive breed of pony originating from Poland. They are a descendent of the ancient Tarpan horse also known as the Eurasian wild horse a now extinct species. Koniks have become a popular breed for conservation grazing in the UK, particularly on wetland sites. They are very well adapted for coping with wetland sites and the lush vegetation unlike many other breed. They are able to do this by putting on considerable condition (weight) in the summer and can then loose up to one-third of their body weight in the winter with no ill effect. However, in the future the adaptability and hardiness of this breed may prove that they are useful on a number of different habitats. NWT Thompson Common has a diverse range of habitats such as woodland, open water and wet grassland to name a few. In fact it is so diverse an amazing 34 NVC (National Vegetation Classification) wetland communities are found within the reserve, two of which are so unique they have not been classified. So by pairing the complexity of the reserve with the adaptability of the Koniks makes them the ideal species to graze the site.

Before starting with NWT I knew very little about horses and if completely honest was not all that fond of them. Having worked on a dairy farm for a short while I was familiar with cattle and was confident in moving and managing them. I became to know their temperaments and was able to predict their movements and reactions. Dairy cattle generally go in the direction you are pushing them with a bit of gentle persuasion. However, as I found out horses are slightly less predictable and quite often take you by surprise.

Thompson Common is split in to a number of large compartments and we regularly move the ponies around the site taking into consideration a number of things including the condition of the site and also the condition of the ponies. As most people are aware our ponies are a little wilder than your average domestic ponies in fact we use the term ‘semi-wild’. So it is not a matter of putting a head collar on and leading them through a gate, we have to round them up. Unlike the cattle I mentioned above these ponies quite often turn back on you and change direction when you least expect it. Their behaviour when moving them can be very different from day to day, quite often relating to the weather conditions. Some days you just have to open the gate and let them trot through and other days they try to go any direction except the way you want. This is usually when it is windy and raining, the ponies primary senses, hearing, smell and vision used for detecting danger are distorted. This leads to them becoming nervous and skittish thus making it more difficult to predict their behaviour and move them.

As well as moving the ponies around the site we obviously keep a close eye on their health, weight and general condition. We do this several times a week, but once a month we carry out a more detailed ‘body condition score’ on each individual. This is a scoring system from one to nine, one being very thin and nine being extremely fat. This is a useful management tool which can provide an indication of necessary nutritional requirements and help prevent welfare problems. NWT aims to have their conservation herds scoring between 4 and 6.

This is also a good opportunity to record other information such as the condition of the hooves and note anything else that may need monitoring or attention. To carry out these condition scores you need to be able to identify each pony individually, which is not an easy task in itself. When I first started with NWT we had 27 Koniks at Thompson Common (which to me all looked very similar) and it probably took me around six months before I could confidently put a name to a face, so to speak. Since then we have moved a number of Koniks off to other NWT sites leaving us with a more manageable herd of 13, who are hopefully going to be joined by some highland cattle in the coming months. Twice a year we are paid a visit from the vet and farrier who are both very experienced and knowledgeable. They carry out routine health checks and also trim any hooves that may not be breaking naturally. These ‘pony days’ as we call them can sometimes be very long, as we have to setup specially designed handling systems, round them up and also check each pony individually before usually moving on to another NWT site to repeat the process again. Though hard work, these days can be good fun and it often brings together a number of NWT field staff that may not usually work together. I now find working with these ponies very rewarding and can see what a fantastic contribution they make to the conservation of Thompson Common.
Posted by Norfolk Wildlife Trust at 19:44