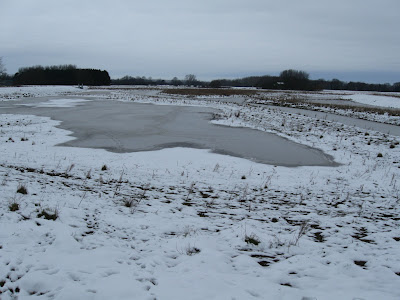 Since September 2010 construction work on the Hilgay section at the Wissey Wetland progressed without interruption until summer 2012, when the wet conditions resulted in a temporary cessation. Work restarted after a few weeks and continued until October when the continuing wet ground conditions called another halt. It is extremely frustrating that as we entered the final straight for construction, work has had to stop. The thawing of the recent snow will have added to the problems and so it is unlikely that work will re-start until the spring. 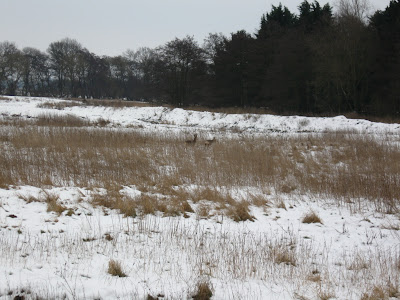 Wildlife has had the Hilgay site to itself for some time. Brown hares have been particularly obvious, with four together in the storage lagoon recently and two Roe Deer grazing over the site. Before the snow there was about 50 Mallard using the flooded ditches but they moved off when the site froze up. Barn Owl has also been hunting over this site and the neighbouring Methwold land. Last summer a pair of Barn Owls raised two young (a male and a female). Several Woodcock are overwintering in the wood but the roving tit flock is very small this winter.  A flock of 30 Siskin in the alders was a welcome addition to the site.

We aim to start putting up fencing and gates shortly to facilitate grazing of the Hilgay site.  Organisation for reed planting has already started with the collection of seed heads. These will be sown and the resulting plugs planted out during the summer. There are already small patches of reed getting established on the site but the planting will increase the rate of spread across the site.
Posted by Norfolk Wildlife Trust at 19:45