Two months ago I found an orphaned fallow fawn, only a few weeks old, but full of life and totally wild and unapproachable, on Warren Hills, near Mildenhall.

I expected nature to take its course, but over the following weeks I kept seeing her, just poking her head out from behind a tree or bush, but seeming to have managed to fend for herself against the odds. The site is fenced, and being as small as she was back then, she was totally trapped, but with access to food, water and cover, she was doing well. 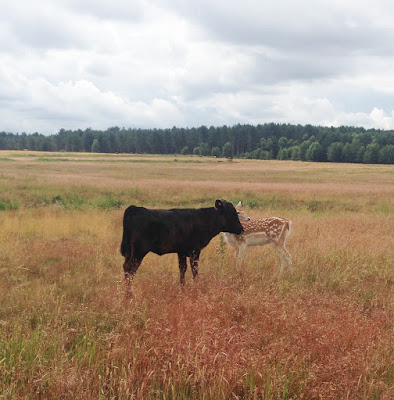 Then last week, I had a local cattle grazier put a herd of cows and calves on the site as part of its routine management. To my astonishment, the now considerably larger fallow doe has become part of the herd, as the photo shows, even being groomed by fellow youngsters.

Even more surprising is that, because the cattle aren’t scared of people and so don’t run off, neither does she, and I have lots of pictures taken from as little as ten feet away. 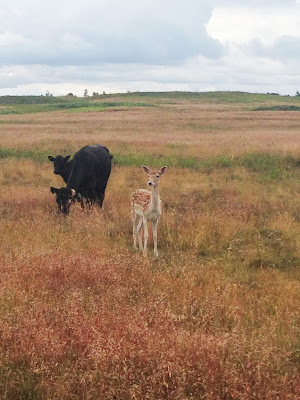 It's widely said (within the deer management world) that deer and livestock do not mix, to the extent that deer will totally avoid areas they would normally frequent when sheep or cattle are present, and for a period after while there is still strong scent on the ground. However, this appears to disprove this theory: her desire to be part of a herd is clearly stronger than those other instincts which are presumably learned from older deer.

The site will re-open to dog walkers come September, so she really needs to have worked out she is a deer by then and be able to jump the fence. 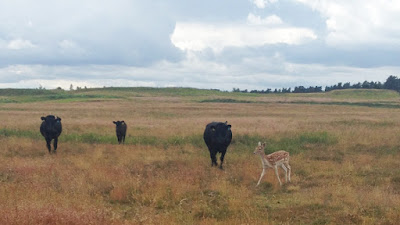 Posted by Norfolk Wildlife Trust at 19:27