The fine weather and the all-clear on the archaeology side have meant that construction work by Fen Group is progressing well at Methwold, the joint project with Environment Agency to provide compensatory reedbed.

The perimeter bank and ditch, installed as a flood-defence measure, should be finished this week. It is interesting to compare the very sandy soil in this area with that over much of the rest of the site, which has the deep peaty layers. This higher, drier sand island was inhabited by Neolithic people. Simultaneously work is progressing with the main reedbed embankment. Soil is being moved across the site from deep pools to form the key trench below the embankment and its inner core. The deep pools will act as fish refuges and also provide the vital edge between open water and reed that bitterns favour for feeding. 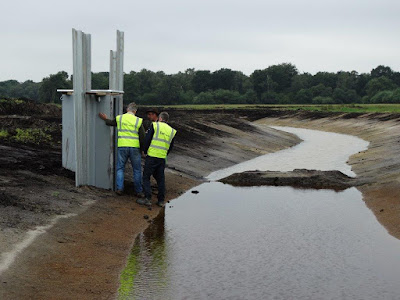 The first of five water control structures has also been installed. This will control the flow of water between the two main reedbed compartments. The work has to be completed by the end of October and so we are hoping the fine weather continues to enable the work to proceed without delay.

On the Hilgay site the breeding season for some species still seems to be in full swing while for others the autumn migration is underway. The five pochard ducklings are growing well and are now nearly as large as their mother and I also saw four tufted duck broods, including the one with 10 young.
Two pairs of great crested grebes have young while a third pair is still on a nest, as are several pairs of little grebe. The black-headed gull colony is still very noisy and there is a range of ages of birds present. The avocet pair has one remaining chick out of a nest of four eggs while lapwings have finished breeding and have flocked up, with over 80 on site this week. Three ruff remain and redshank, oystercatcher, little ringed plover, green sandpiper and greenshank are still on site. At least 19 little egret were around too and herons were still busy feeding on the site.
Posted by Norfolk Wildlife Trust at 14:22