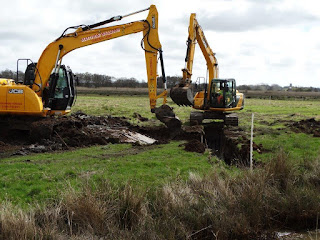 NWT and the Environment Agency are working together to create a new reedbed near the village of Potter Heigham.

Construction of the reedbed and the internal, deep pools were completed last year.

Work by Matthew Williams Digger Hire this year has seen work on the ditch network to carry water from Hickling Broad to the site across NWT grassland. 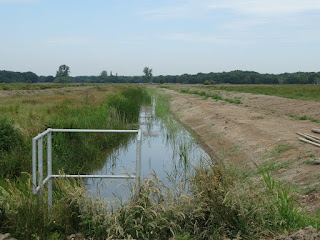 Construction was completed in mid-June but it won’t be until November that we can let water through to the site, under licence. The aim is to raise the water level up to sea level which should result in the flooding of much of the site to make it suitable for reed establishment.

Reed planting was done in 2013 and last year. The former reeds, around the internal perimeter ditch, have colonised well and should start spreading out into the neighbouring fields as the site is wetted up. 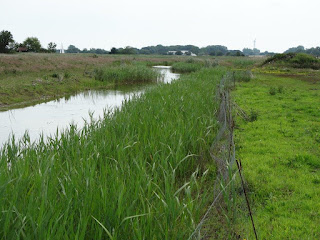 Naturally-occurring reeds on the site, in the ditches along the field boundaries, are already growing in the field margins. The reeds planted last year have not fared so well. There has been some establishment along the new internal pools but those planted within the fields have failed to grow. Many of the reed plugs were found lying on the ground, either because they had been pulled out by birds or had floated out when water levels were raised last winter. These are being re-planted currently, with warning tape being draped across the caged areas to deter birds from feeding on the reeds.

This winter, water levels will be raised gradually and the reeds checked to make sure they do not float out.  If required a further year of reed planting will be carried out next year to ensure rapid development of the reedbed across the site.

Posted by Norfolk Wildlife Trust at 18:58