What would I do without you! 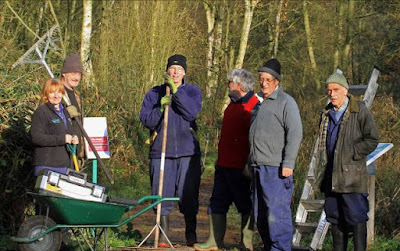 I wanted to write about my lovely volunteers. As a lone warden for the NWT nature reserve Trinity Broads I know I could not get a fraction of the work done without them.The team is 30 strong with some coming out at least once a week and others coming to help with specific projects and surveys.

The Monday group work alongside me to do the bulk of the practical conservation work from scrub clearing to reed bed conservation to hedge planting (and a whole load more). I generally find a generous supply of cakes does the trick for keeping energy levels and morale high even on the wettest of days.

Then there are those who help with bat surveys, breeding bird surveys, monthly wetland bird counts, checking mink rafts and general wardening. They achieved in the last three months more than 1,000 hours of voluntary conservation work. 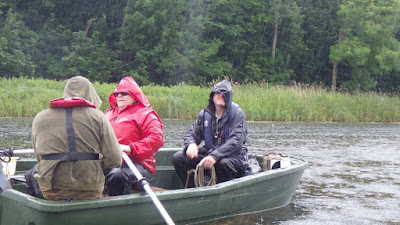 And they do it all with such good humour, enthusiasm and stoicism. I have asked them to do some challenging things, in March we were out washing goose poo off the gravel on the tern nesting platforms; in June and July we pulled vast amounts of the non-native invasive Himalayan balsam. They help with events, aquatic plant surveys and a lot of raking and burning cut reed... in ALL weathers.

In return they enjoy the company, the beautiful wildlife, getting to see secret places, and, of course, Cake. I am grateful for all the hard work including all those who bake and bring cake! THANK YOU! 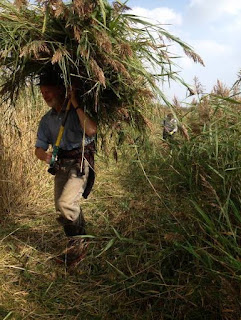 If you are interested in volunteering with Norfolk Wildlife Trust, please take a look at our volunteer section on the website.

Posted by Norfolk Wildlife Trust at 19:55 No comments:

It surely is an ill wind that blows no good. The winter storms that resulted in the devastating sea surge during December 2013 caused extensive damage to the North Norfolk coast, and Cley Marshes suffered too. And yet...

There is more shingle now, piles of it; powered 100 metres inland by the uncontested might of the rampant North Sea. This mass of eroded rock fragments has covered some grassland where skylarks used to sing their sweet song and has smothered small pools where starlet anemones once dwelled. But it has also created opportunities for those birds that love to nest on these exposed expanses, as well as allowing NWT reserve staff to fence off tracts of the extended habitat to safeguard these pioneers. And the carpets of yellow horned-poppies sprouting from seeds dispersed by the flood are to die for.

New pools have been created on the area where East bank adjoins the coast road. These were dug on an area of reed smashed flat by the floods and which didn't seem in any hurry to regenerate. Almost instantly black-tailed godwits, ruff and redshank exploited the shallow water which they obviously found much to their liking. Herons use the area in their prenuptial gatherings and little egrets are regular visitors. Already new reed has enveloped the margins and the islands which will no doubt prove attractive nesting areas for a variety of wildfowl and warblers as it develops further.

The cinnabar moth colony that once festooned the thistles and ragwort along the south side of the raised shingle ridge was eradicated at Cley, but at Salthouse they thrive to still decorate the flowers of both plants. When I visited the area a couple of weeks ago every flower head had insects supping nectar, some had multiple visitors jostling for position. A joy to see.  It was also heartening to see many Essex skippers enjoying the wealth of pale purple thistle flower on offer all along the East Bank.

But for me the most fascinating bonus from the storm damage can be seen at Gramborough Hill, just east of the Salthouse beach road. Here the sea has sliced a chunk off the north face of the small hillock to create a low sandy cliff which has been chosen as a nesting site by a colony of sand martins. 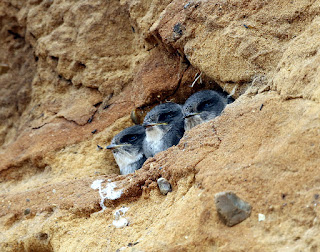 I spent a happy hour there watching the adults hawking insects over the grass clad slopes atop the recently formed cliff and cavorting together over the beach. 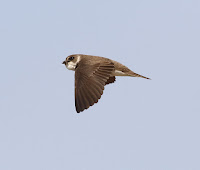 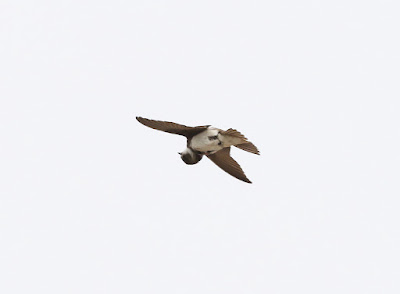 Some newly fledged birds were also honing their aerial skills whilst younger nestlings gathered at the entrance to nesting burrows waiting for the next mouthful of juicy fodder. I snapped away at these incredibly fast moving hirundines trying to capture them in pursuit of flying insects invisible to me. My hit rate was ridiculously low, but a few shots bore fruit and showed some fascinating postures, attitudes and habits. Some images captured birds preening mid-flight with their heads turned upside down to facilitate easy access to their tiny sharp claws. Several caught birds with throat pouches crammed full with insects showing what wealth of prey items are available to them within 100 metres of their summer homes. Others simply illustrated what graceful masters of the air these diminutive migrants are. There is no way I would have been able to properly observe these nuances without being able to freeze the action at 1/5000 of a second. Even then their movements were so swift that only a handful of images were acceptably sharp. Lovely birds, sadly one we seldom get a chance to look at closely nowadays. However these plucky ones have quickly exploited a new resource and hopefully will be a feature here for many years to come.


An ill wind indeed blew 18 months ago, but it has, in unforeseen ways, blown much good.

Visit Barry's blog at: www.easternbushchat.blogspot.co.uk
Posted by Norfolk Wildlife Trust at 20:24 No comments:

My Week at Cley

Our Community and Education Officer based at Cley Marshes - which has been made possible thanks to funding from the Heritage Lottery Fund - who has been able to support a Year 10 student during their work experience week form school. James Barton has been a great help to us at Cley during his week, and has written of his experience. 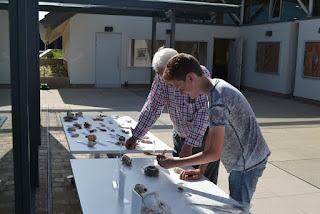 I was fortunate to secure a week’s work at NWT Cley Marshes last week and what a wonderful week it was. I enjoyed a varied week with many different activities to keep me occupied and to give me an insight into the different areas of work needed to operate such a popular place.

I started the week with learning about the history of Cley and the reserve which was very interesting to learn how such a great nature reserve has evolved into how it looks today. In the afternoon it was good to get out onto the reserve and it was a chance for me to see the wildlife being recorded throughout the day. Highlights were: curlew sandpiper, spoonbill, little gull, grayling butterfly and red-veined darter dragonfly. 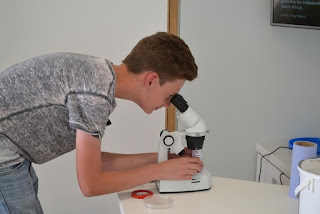 Day two was a much more active day as I was assisting the Summer Warden with general maintenance to keep the reserve running smoothly. This was very enjoyable and I learnt many new things about botany and insects. I learnt that cigar flies stimulate the reed head to grow abnormally in to a sort of cylindrical ball where the fly then lays its egg which pupates into the adult.

Day three was working on reception. I was told this was a very important job as this was the public’s first contact and therefore the organisation would be judged on this. At first I was nervous about this task but after serving my first customer I became a lot more comfortable and it ended up becoming one of my favourite tasks of the week!

On Thursday I helped out with a free taster session which was pond dipping. This was very enjoyable and we spent the afternoon seeing what fresh water animals there were. We found many dragonfly nymphs and one moulted its exuvia in front of us which was great.

I spent my final on reception again and fishing for plankton. We threw a very fine net into the ocean and dragged it in the water and we then collected the sieved water in a bottle. This was then taken back and we looked at the water under a microscope and found two plankton species. This was very interesting as I had never seen plankton before. There was also a chance for me to help set up a community open evening where everyone who lived within a certain range of Cley Marshes could visit various stands about wildlife and could be given tours of the reserve. I enjoyed showing members of the public these different tables where different areas of natural history was being exhibited. 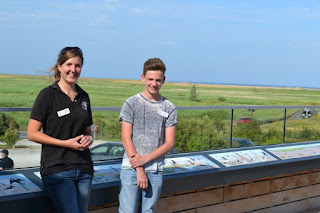 I feel very privileged to have been given the opportunity to spend a week in such an amazing environment. I would like to thank all the staff at Cley for such an opportunity, for making me so welcome and a special thank you to Rachael Wright who organised all my activities.


We will be able to offer one or two Year 10 placements at Cley in 2016.  Please look on our website volunteer page for details of how to apply in the new year.

Posted by Norfolk Wildlife Trust at 18:58 No comments: