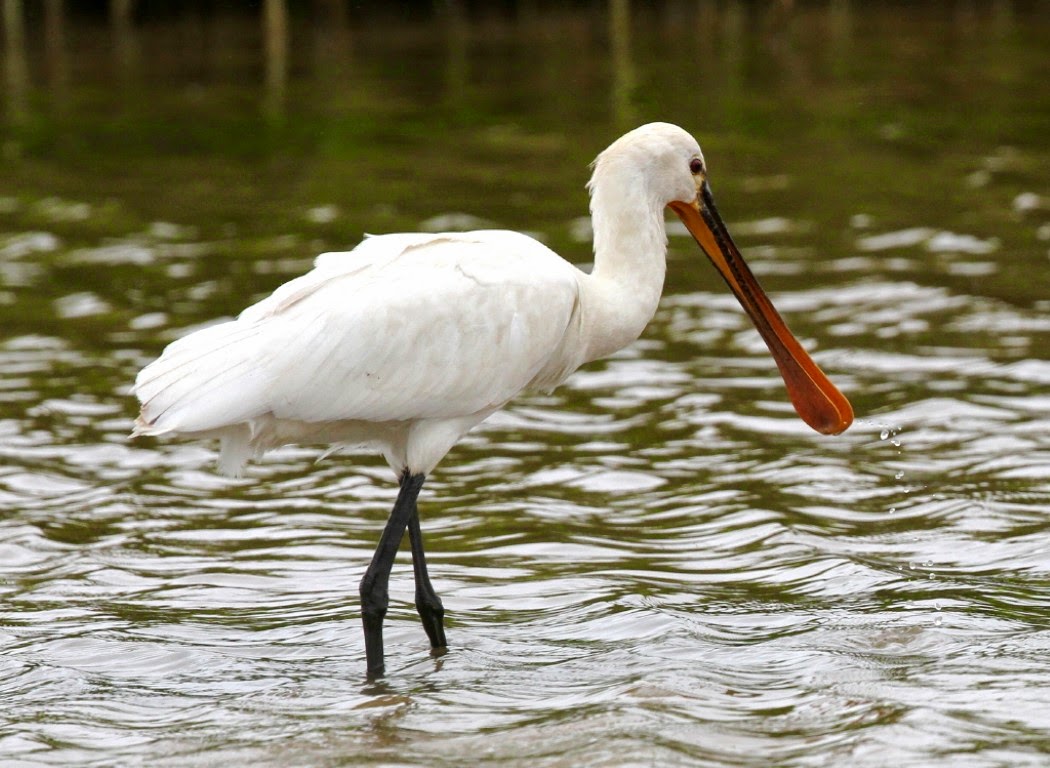 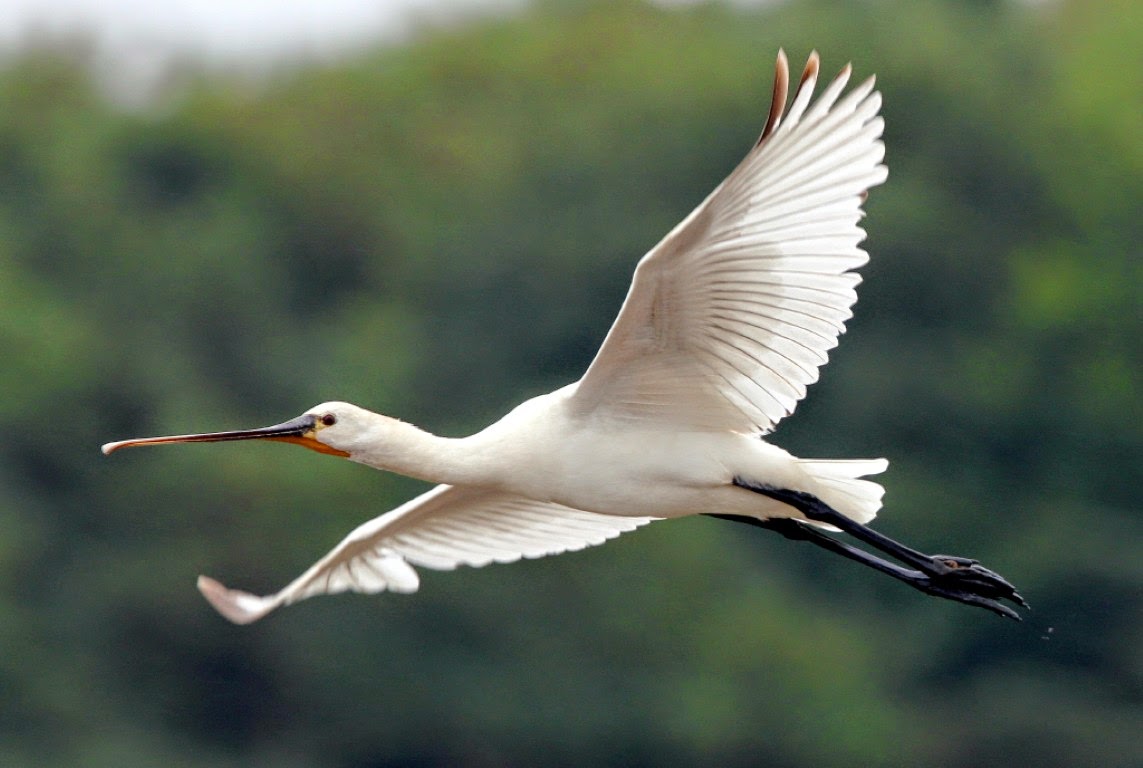 The pair of marsh harriers are still busily feeding their young with the female of the pair, now affectionately referred to as ‘Blondie’ in recognition of her vivid cream markings, regularly being seen hunting the fields south of the reserve. She seems far more competent a hunter than the male bringing back quite sizeable prey, young rabbits, rats and similar sized offerings for her brood. The male, who may well be relatively young and inexperienced, doesn’t seem quite so able and as far as I have observed often appears in the vicinity of the nest empty-taloned. However I’m sure the young are being well cared for overall and will surely soon fledge adding yet another dimension to the Cley experience.
Posted by Norfolk Wildlife Trust at 19:21 No comments:

The species most asked about this month on the Wildlife Information Service is bee orchids followed by bees and bee nests!

The weather this spring seems to have brought about a boom in bee orchid numbers.

Many of you have been spotting them on the edges of farmland, brownfield or industrial sites, a frequently asked question being are they protected? Unfortunately although protected when growing in the wild under the Section 13 of the Wildlife and Countryside Act 1981, which makes it illegal to up-root, when they are growing on private land the landowner can do as he or she wishes; and the only thing you can do as somebody passionate about these beautiful orchids is to educate the landowner on their importance, and how the site can be managed to benefit them.

If growing on council land you could contact them and ask them if they could not mow the area until the end of July so that they have a chance to seed, if some small stakes could be put up around it, this will also help to protect them, and make people aware they are there.

Bees and bee nests
Bumblebees are very important pollinators for our crops and flowers, bio-diverse margins of farmlands being an important food source for bees pollinating crop.

Common bumblebees in England:
Bees are non-aggressive and will only sting if they are threatened or disturbed, if not they will go about their day doing a great job of pollinating and making honey.

Bee nests
It is important to know that bees rarely nest in the same place, so if you have them in your garden this year, it is unlikely you will have them the following year. We understand that sometimes the positioning of bee’s nests can be awkward and as a last resort you or a local bee expert may have to move the nest to another location. To find out more about how to move a bee nest please check out the Bumble Bee Conservation Trust’s website: http://bumblebeeconservation.org/about-bees/faqs/moving-bumblebee-nests/
Posted by Norfolk Wildlife Trust at 11:54 No comments:

If you like stone curlews then you should put a ring on it... 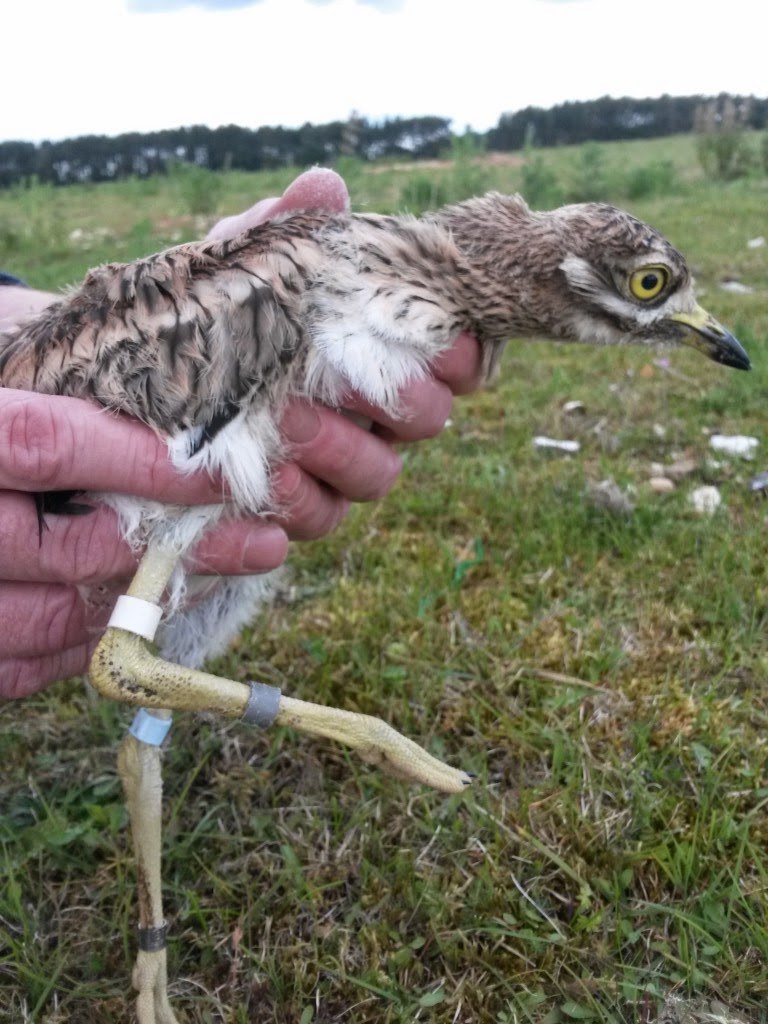 So like the line from that song (I really shouldn’t admit to knowing it!) we decided to ring the chick outside the hide last week. Fortunately the weather was favourable, as the chick - as you can see from the photo - is quite big now. This chick is one of the two from the video I took on the last blog. The chicks are rung in conjunction with the RSPB, for monitoring purposes.

The plan was  simple, several of us were to position ourselves in the hides directing Tim from the RSPB as to where the chick was. Usually stone curlew chicks, like other ground nesting birds, will “hit the ground” and keep completely still, relying on camouflage to hide from predators.

This one, however, decided to be a “runner”, and as soon as Tim got close, it went off like the road runner (meep meep), and this made for quite comical few minutes watching Tim chase the bird from the hide!

It  was back in May that we found the scrape and the mottled camouflaged eggs. 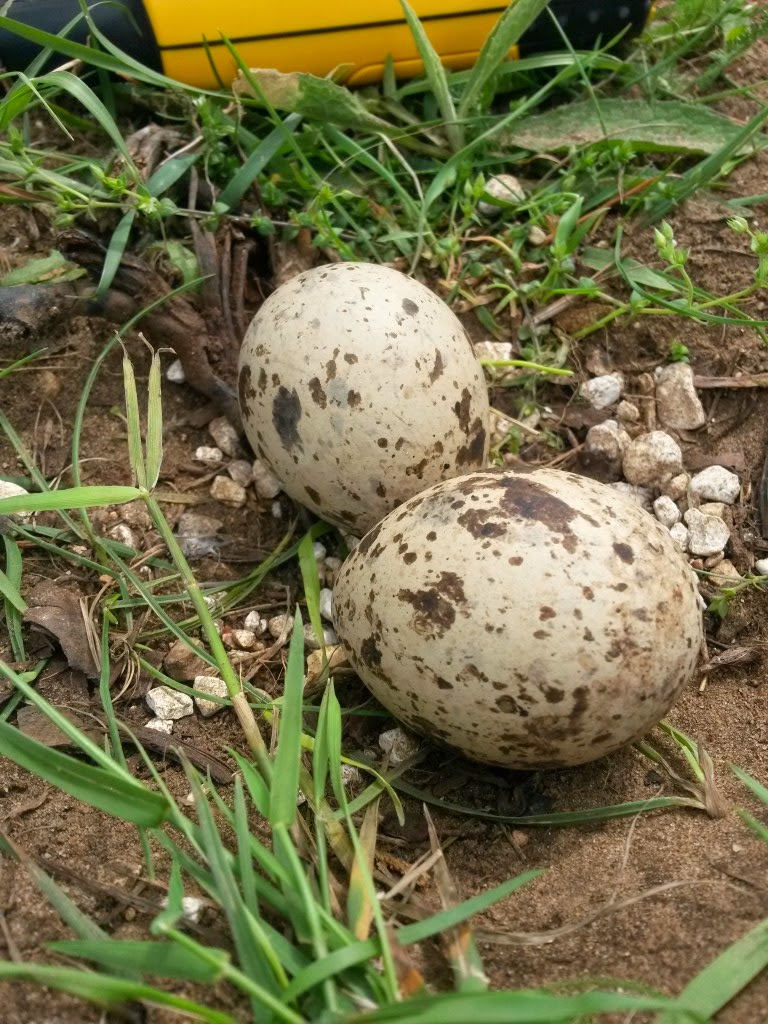 It was quite amazing to get up close to a stone curlew, from my normal view point through a scope. Seeing their huge eyes up close, was particularity interesting. 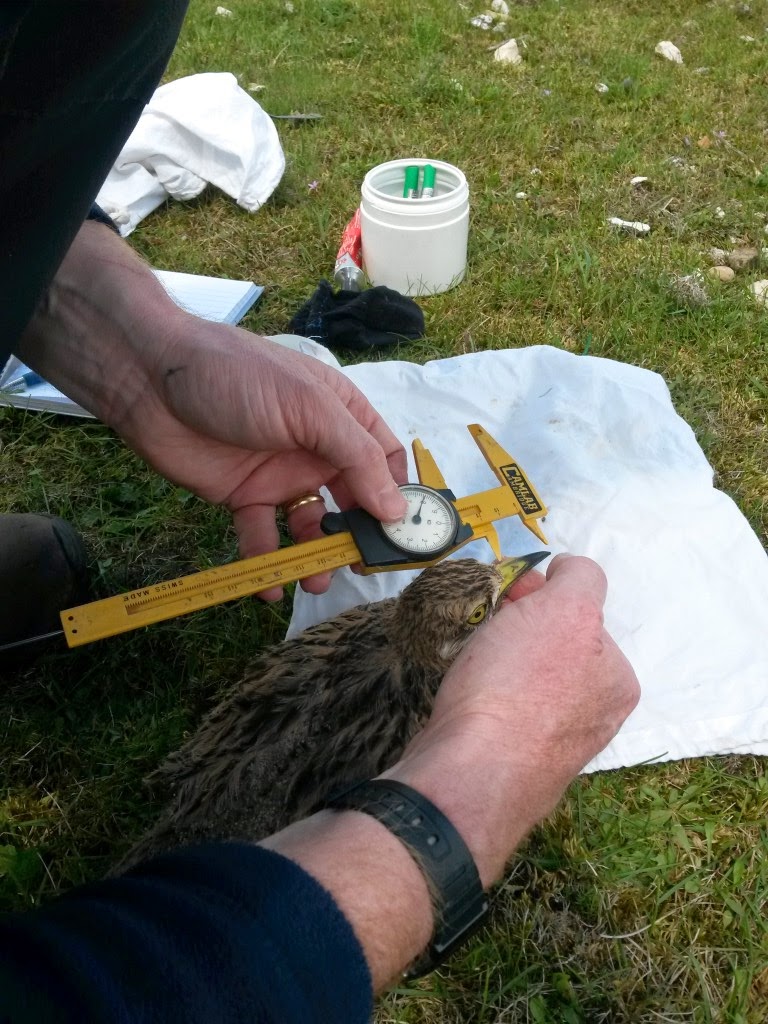 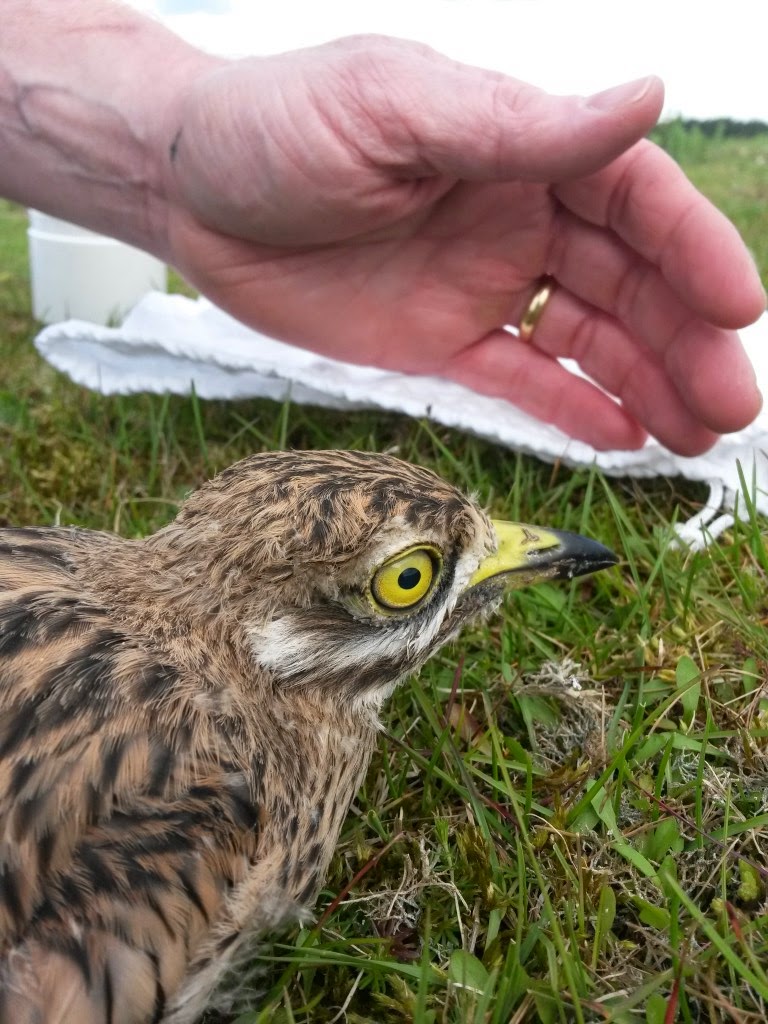 The whole process of recording weight - which was 336g for this chick - and other data as well as fixing the rings only takes around 10 minutes. So disturbance to the bird is minimal, and the parents who watch from a distance returned within 10 minutes of us leaving the chick in the undergrowth.

So keep your eyes out for this chick and this ring combination from the hides!

This chick has now fledged and been kicked out by its parents. This pair will hopefully decide to re-lay over the next week, and fingers crossed we shall have another set of chicks in July.

The pair of stone curlews who lost both of their chicks early on in May, have successfully brooded two more, and they have been viewable from the West hide the past few days.

Stone curlews have a varied diet of invertebrates. I have witnessed them eating big worms and running around trying to snap butterflies from the air. But the other day I saw a peculiar sight, when one parent tried to eat and then feed a chick a young mole, needless to say the chick had trouble finishing its meal!

Other Wildlife news at Weeting Heath

A pair of spotted flycatchers have nested in one of the pine trees not far from the Visitor Centre. They have been more active snapping moths and flies out of the air this last week so probably have hungry chicks to feed.

We also had  two common cranes fly over the centre last week, which was quite exciting as these are the first I have seen in this country, heading in the direction of Lakenheath.

Living on site, I often see bats at night flying around the visitor centre. I was curious as to what species we had here. So I decided to take part in the Norfolk Bat Survey. Anyone can take part, you can find more details on http://www.batsurvey.org/.

I picked up the equipment and set it up over three days, the memory card was then sent to be analysed. The results showed that I recorded an amazing 10 species of bat at Weeting Heath, these were common pipistrelle, soprano pipistrelle, noctule, barbastelle, brown long-eared, Daubentons, serotine, leislers, and low confidence of whiskered and nathusius pipistrelle. 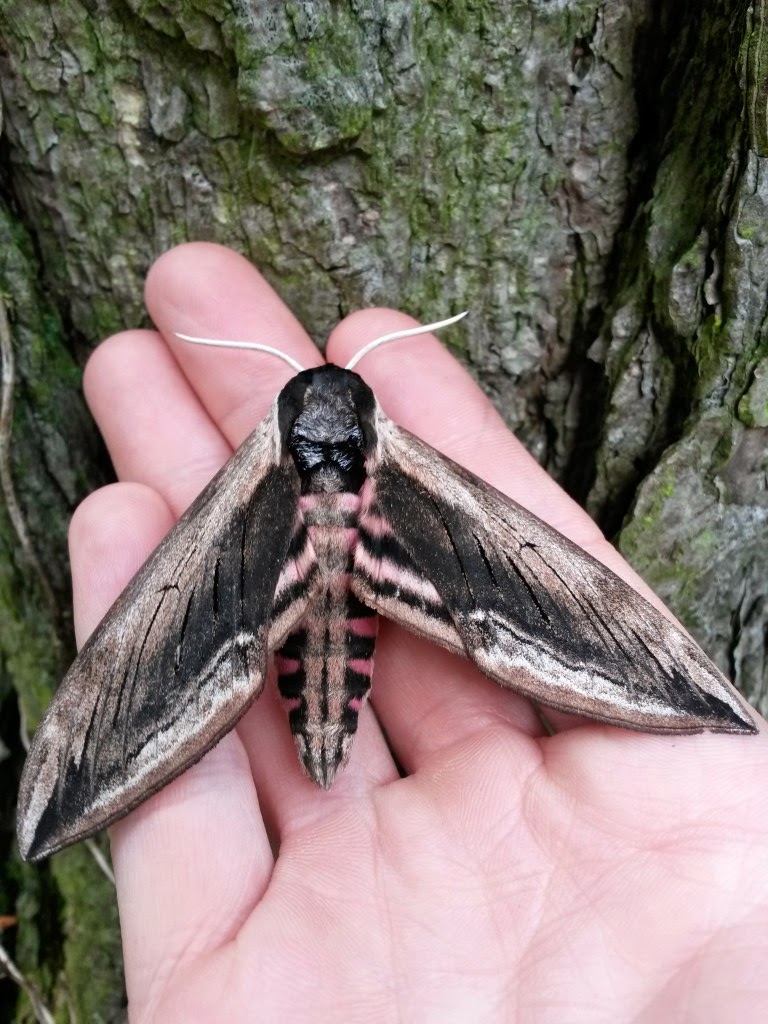 The bats will be mostly feeding on moths, here at Weeting Heath over 300 species of moth have been recorded, including these from the latest moth trap.

It’s amazing what species are around us that we don’t know about.

Butterflies and damselflies have also been abundant in the last few weeks, with 15 species being recorded including the first meadow browns, large skippers and ringlets being seen.

Posted by Norfolk Wildlife Trust at 18:33 No comments: