Answering the call: a year of wildlife festivals at Cley 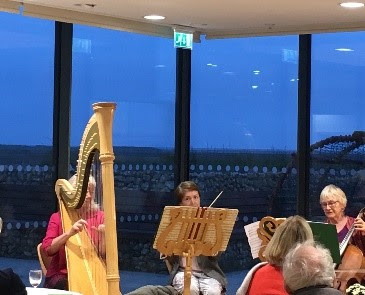 To begin our celebrations for the year we had our first Cley Calling festival, Spring Song, tie in with International Dawn Chorus day.  The aim of the festival was to link the natural music and wildlife of the marsh to music and art that has been inspired by the marshes. On Friday night two sound artists spent the night in one of the hides in order to record the dawn chorus, which was broadcast live on the International Dawn Chorus website. The artists gave two free talks on Saturday morning about the process of capturing sound and played some of their recordings (which can now be found on Richard Fair’s website). Throughout the festival we hosted an exhibition called Confluence project, which showcased the work of three artists who take inspiration from waterways and coastlines in East Anglia. The exhibition was connected to Sundays evening’s performance, which involved a piano improvisation and a multi-media visual arts performance. The education centre was transformed with a grand piano and a dark space with ever changing images projected onto one of the walls. This was the most alternative event we had run at Cley and it was great to try something new within the space. 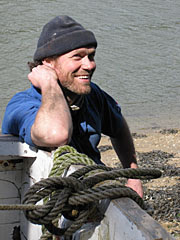 Next up was Summer Sea, a festival designed to celebrate life beneath the waves during National Marine Week. A talk by Paul Sterry and Andrew Cleave kicked off the celebrations; fascinating stories of their travels across the UK to document our coastal wildlife, combined with incredible microscopic photographs of elusive sea creatures, made their talk a brilliant start to the festival. On Friday evening we welcomed James Boyd (right) to Cley to perform his enchanting ‘Stolen Years’ piece. Readings from the log book of the Concord interwoven with seasongs and poetry left the audience feeling as though they were part of the Concord’s story. The remainder of the festival included a classy evening of Pimms, pizza and poetry featuring Kevin Crossley-Holland, a glorious sunny day of free marine-based crafts down at Cley beach, and a mysterious interactive puppet performance for all the family to enjoy. 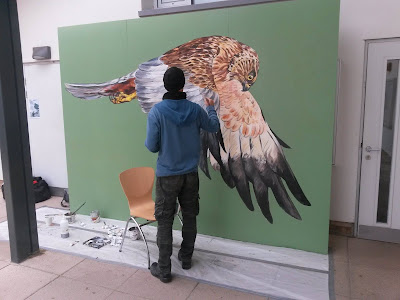 The lead up to Autumn Colours was slightly worrying for all of us at Cley, because the whole reserve was still looking as healthy and green as ever as we left the summer months behind! However once the festival kicked into full swing with the arrival of street artist ATM, we started to see some of the beautiful autumnal oranges and reds we were hoping for. Throughout the festival ATM painted a fantastic female marsh harrier on a mural outside the visitor centre (left), meanwhile a variety of autumnal events focused on health and wellbeing were taking place all over the reserve. We were visited by Laurie Parma, a wellbeing researcher from the University of Cambridge, who gave a fascinating talk on the relationship between wellbeing and biodiversity. To round off the festival, we finished with a peaceful yoga session looking out over the marshes, and an early morning ramble around the reserve followed by a delicious home cooked roast: a perfect end to a wonderful week. 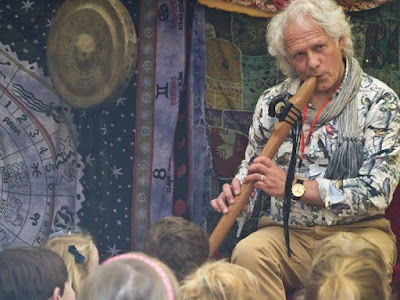 Last, and by no means least, was Winter Skies. We began the festival with a lunch time talk from Dave Horsley, who shared his knowledge and photographs of migrating birds from the Arctic. That same evening, we were joined by the Norfolk Coast Partnership, who gave a talk on their Dark Skies project and their collaboration with Norfolk Astronomy Society, who took us out onto the terrace for some stargazing. Saturday night saw us welcome over 100 guests into the visitor centre for a performance by Brian Briggs & Jon Ouin, two of the four members of ex-band ‘Stornoway’. Brian & Jon performed a series of their old songs, which were influenced by birdsong and wildlife, and shared with the audience some of their most remarkable experiences with nature. Perhaps the most memorable of their songs was ‘Boom went the Bittern’, a song that Brian jokingly described as an audio guide to birdsong, with lyrics such as: ‘“Teacher! Teacher!” said the tits on the feeder’ and ‘“Chiffchaff! Chiffchaff! said its own name, and I wish they all did the same’. And finally, on the last day of the festival we hosted the chair of the Society for Storytelling himself; Paul Jackson. He told his winter tales for all the family to enjoy as everyone in the audience nibbled away on some mince pies and sipped at their mulled wine or hot squash. A brilliant afternoon to prepare us all for the festivities of the Christmas holidays.

We hope everyone who journeyed to Cley Marshes this year had a truly unforgettable experience, and we would be delighted to welcome you all back to our beautiful reserve in 2018. From all of us at Cley Marshes, we thank you for supporting our work, and wish you a very Merry Christmas and a Happy New Year.

The Cley Calling festivals were made possible thanks to funding from the National Lottery through the Heritage Lottery Fund.
Posted by Norfolk Wildlife Trust at 11:33